The Center for Leadership & Social Change, in partnership with the President’s Council on Diversity and Inclusion, Office of the Vice President for Student Affairs, and the Latinx Faculty Staff Network, is proud to host Florida State University's Latinx Cultural Celebration.

The Latinx Cultural Celebration is designed to pay tribute to the generations of Latinx Americans who have positively affected our historical, political, economic, and/or social context in the United States. The goal of the cultural celebration is to bring the university and Tallahassee communities together to enhance our cultural awareness, increase our knowledge of significant contributions, and share untold stories of the Latinx community. The celebration takes place annually during Hispanic Heritage Month.

Florida State University honored the legacy of the Latinx community at the inaugural celebration on Sept. 17 in the Ruby Diamond Concert Hall.

During the celebration, participants are introduced to Latinx culture, music, and traditions. At the ceremony, a faculty or staff member is presented with Florida State University’s Latinx Distinguished Service Award and a student receives  the Rosalina Gonzales Award. According to our Florida State history, Rosalina Gonzales is considered to be the first Latinx student to graduate from the Florida State College for Women in 1921. The program ends by engaging attendees with a notable Latinx keynote speaker.

The 2020 Latinx Cultural Celebration was held virtually via a watch party-style event. View the recorded ceremony below.

To mark the start of Hispanic Heritage Month, download our annual calendar that features prominent figures from and holidays celebrated in various Latin American countries. 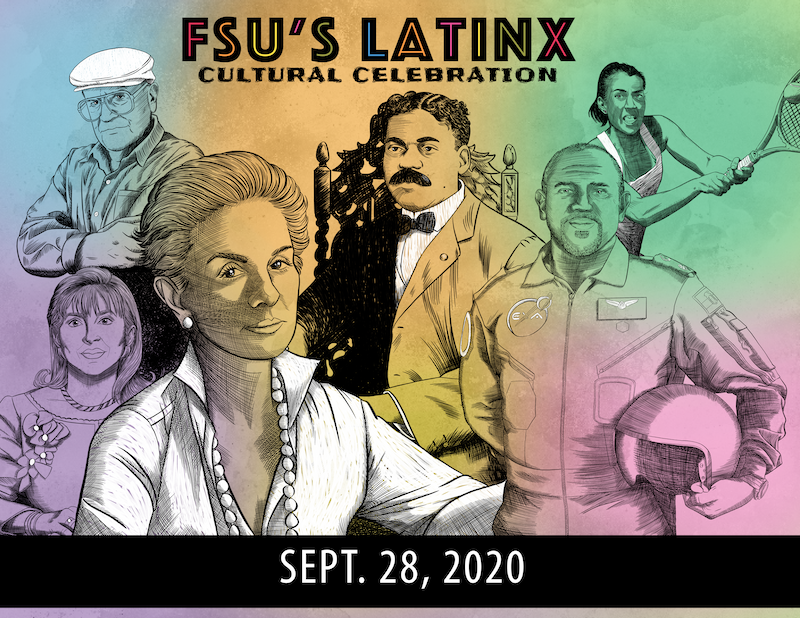 Each year throughout the United States of America, communities observe National Hispanic Heritage Month from Sept. 15 to Oct. 15, by celebrating the histories, cultures and contributions of American citizens and immigrants whose ancestors came from the Spanish-speaking Caribbean, Central and South America, and Spain.

The terms Hispanic, Latina, Latino, and Latinx are umbrella terms primarily used within the United States to describe communities that represent more than 22 sovereign countries throughout the Americas and the Caribbean that have a shared history of being colonized by the Kingdom of Spain. It is common for individuals grouped into one of these umbrella terms to self-identify with terms linking one to ancestral lands such as Puerto Rico, Dominican Republic, Colombia, Mexico, or Cuba.

The international term Latinx is the newest of the umbrella terms, born from the LGBTQ+ social movements throughout the Spanish-speaking Americas. The use of the letter “x” in place of the “a” or the “o” is a choice scholars make in their verbal and written communication designed to challenge the gender norms deeply embedded in the Spanish language, which assigns a feminine or masculine connotation to words. For the purpose of this celebration, the term Latinx will be used broadly, in an effort to be inclusive of all individuals throughout the U.S. who have Latin American and/or Spanish ancestry, regardless of gender.

If any alumni, faculty, or staff member have stories of FSU’s Latinx history, we would love to hear and honor them.

The day of Sept. 15 is significant because it is the anniversary of independence for several Latin American countries such as Costa Rica, El Salvador, Guatemala, Honduras and Nicaragua. In addition, Mexico and Chile celebrate their independence days on Sept. 16 and Sept. 18, respectively. Finally, Día de la Raza, which is Oct. 12, falls within this 30-day period.